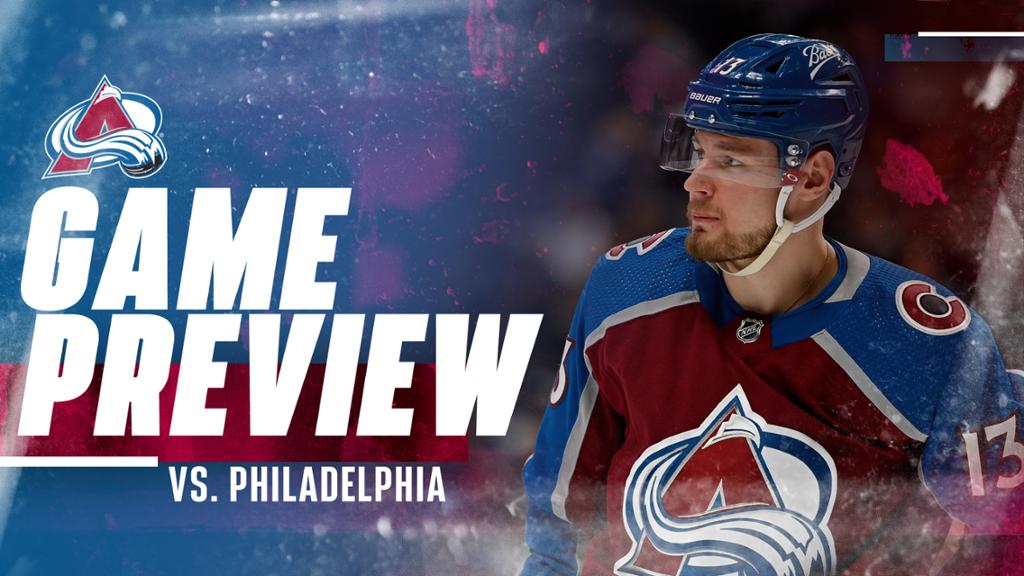 The Colorado Avalanche return back to Ball Arena for the start of a five-game homestand as they face off against the Philadelphia Flyers Tuesday night. Coverage begins at 7 p.m. MT on Altitude at Ball Arena.

The Avs look to continue the momentum after beating Central Division rival St. Louis Blues 3-2 in overtime. Mikko Rantanen scored all three goals for Colorado to tally his second hat trick of the season and the fifth of his career. Rantanen scored in the first, found the back of the net with nine seconds left in the third period to knot the tie and then went on to bury the game-winning goal in overtime.

The Flyers enter Tuesday’s matchup coming off a 5-4 OT loss in Arizona on Sunday. James van Riemsdyk tallied four points (1G, 3A) in his third game back from injury. Morgan Frost, Owen Tippett and Travis Konecny all found the back of the net as well.

Since the franchise moved to Denver, the Avalanche hold a 12-4-5 mark at home versus the Flyers.

Tuesday’s contest is the final meeting between the two teams in the 2022-23 regular season. Colorado visited Philadelphia last Monday and lost 5-3 in a comeback that fell short. Alex Newhook scored two goals, and Mikko Rantanen found the back of the net as well.

Kevin Hayes leads in scoring for Philadelphia with 28 points (9G, 19A). Travis Konecny follows in second on the team with 23 points (10G, 13A) and leads the team in goals.

Goaltender Carter Hart has posted a 2.84 goals-against average and a .909 save percentage in 22 starts this season.

The Flyers block the second-most shots in the league at 521 on the season, averaging 18.38 per 60 minutes.

Mikko Rantanen leads all active Avs players with 13 points (8G, 5A) against the Flyers franchise.

Alexandar Georgiev has registered a .935 save percentage and a 1.89 goals-against average in nine career starts versus Philadelphia.

The Avs average 5.30 giveaways per 60 minutes, which is the lowest mark in the league.

Mikko Rantanen scored twice in regulation and notched the game-winning goal in OT to become the fourth player in franchise history to complete the hat trick in overtime.