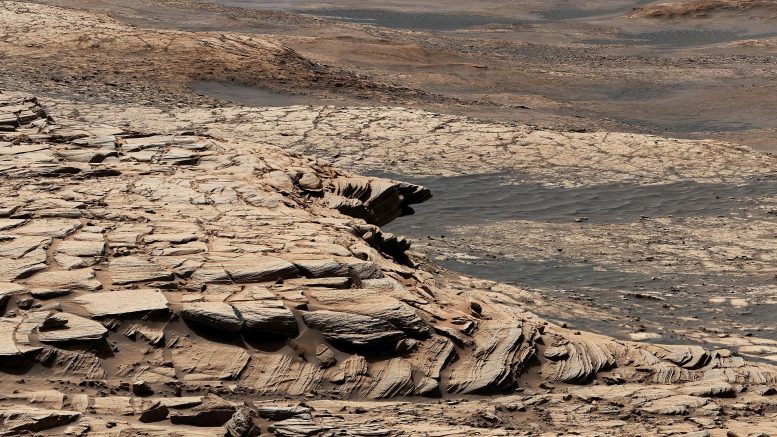 Carbon is critical to life, as far as we know. So anytime we detect a strong carbon signature somewhere like Sample Analysis at Mars. Inside SAM, the rover uses pyrolysis to bake the sample and convert the carbon in the rock into methane. The pyrolysis is done in a flow of inert helium to prevent any contamination in the process. Then it probes the gas with an instrument named the Tunable Laser Spectrometer to find out what carbon isotopes are in the methane. 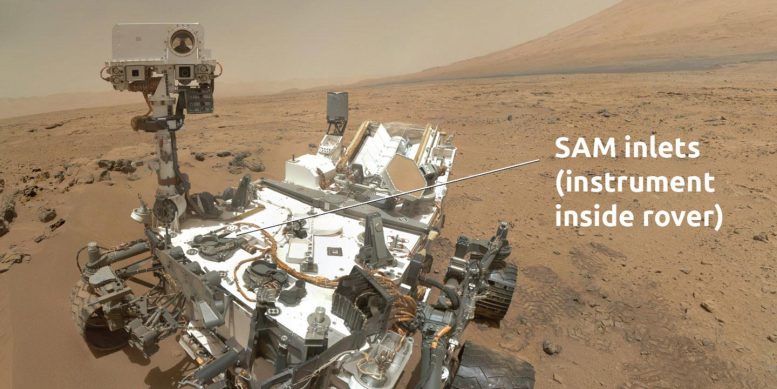 The Sample Analysis at Mars tool is called SAM. SAM is made up of three different instruments that search for and measure organic chemicals and light elements that are important ingredients potentially associated with life. Credit: NASA/JPL-Caltech

The team behind Curiosity’s SAM looked at 24 rock samples with this process and recently discovered something noteworthy. Six of the samples showed elevated ratios of C12 to C13. Compared to an Earth-based reference standard for C12/C13 ratios, the samples from these six sites contained greater than 70 parts per thousand more C12. On Earth, 98.93% of the carbon is C12 Earth, and C13 forms the remaining 1.07%.

A new study published in the Proceedings of the National Academy of Sciences (PNAS) presented the findings. Its title is “Depleted carbon isotope compositions observed at Gale crater, Mars.” The lead author is Christopher House, a Curiosity scientist at Penn State University.

It’s an exciting finding, and if these results were obtained on Earth, they would signal that a biological process produced the abundance of C12.

On ancient Earth, surface bacteria produced methane as a byproduct. They’re called methanogens, and they’re prokaryotes from the Archaea domain. Methanogens are still present today on Earth, in anoxic wetlands, in the digestive tracts of ruminants, and extreme environments like hot springs.

These bacteria produce methane that enters the atmosphere, interacting with ultraviolet light. Those interactions produce more complex molecules that rained down onto the Earth’s surface. They’re preserved in Earth rocks, along with their carbon signatures. The same thing might have happened on Mars, and if it did, it could account for Curiosity’s findings.

But this is Mars. If the history of searching for life on Mars tells us anything, it’s not to get ahead of ourselves.

“We’re finding things on Mars that are tantalizingly interesting, but we would really need more evidence to say we’ve identified life,” said Paul Mahaffy, former principal investigator for Curiosity’s Sample Analysis at Mars lab. “So we’re looking at what else could have caused the carbon signature we’re seeing, if not life.”

In their paper, the authors write, “There are multiple plausible explanations for the anomalously depleted 13C observed in evolved methane, but no single explanation can be accepted without further research.”

One of the difficulties in understanding carbon signatures like this one is our so-called Earth bias. Most of what scientists know about atmospheric chemistry and related things is based on Earth. So when it comes to this newly-detected carbon signature on Mars, scientists can find it challenging to keep their minds open to new possibilities that may not exist on Mars. The history of the search for life on Mars tells us this.

“The hardest thing is letting go of Earth and letting go of that bias that we have and really trying to get into the fundamentals of the chemistry, physics and environmental processes on Mars,” said Goddard astrobiologist Jennifer L. Eigenbrode, who participated in the carbon study. Previously, Eigenbrode led an international team of Curiosity scientists in the detection of myriad organic molecules — ones that contain carbon — on the Martian surface.

“We need to open our minds and think outside the box,” Eigenbrode said, “and that’s what this paper does.”

The researchers point out two non-biological explanations for the unusual carbon signature in their paper. One involves molecular clouds.

The molecular cloud hypothesis states that our Solar System passed through a molecular cloud hundreds of millions of years ago. That is a rare event, but it happens about once every 100 million years, so scientists can’t discount it. Molecular clouds are primarily molecular hydrogen, but one may have been rich in the type of lighter carbon detected by Curiosity in Gale Crater. The cloud would’ve caused Mars to cool dramatically, causing glaciation in this scenario. The cooling and glaciation would’ve prevented the lighter carbon in the molecular clouds from mixing with Mars’ other carbon, creating deposits of elevated C12. The paper states that “Glacial melt during the glacial period and ice retreat after should leave the interstellar dust particles on the glacial geomorphological surface.”

The hypothesis fits since Curiosity found some of the elevated C12 levels at the tops of ridges—such as the top of Vera Rubin Ridge—and other high points in Gale Crater. The samples were gathered from “… a variety of lithologies (mudstone, sand, and sandstone) and are temporally spread throughout the mission operations to date,” the paper states. Still, the molecular cloud hypothesis is an unlikely chain of events.

The other non-biological hypothesis involves ultraviolet light. Mars’ atmosphere is over 95% carbon dioxide, and in this scenario, UV light would’ve interacted with carbon dioxide gas in Mars’ atmosphere producing new carbon-containing molecules. The molecules would’ve rained down on Mars’ surface and become part of the rock there. This hypothesis is similar to how methanogens indirectly produce C12 on Earth, but it’s entirely abiotic.

“All three explanations fit the data,” said lead author Christopher House. “We simply need more data to rule them in or out.” 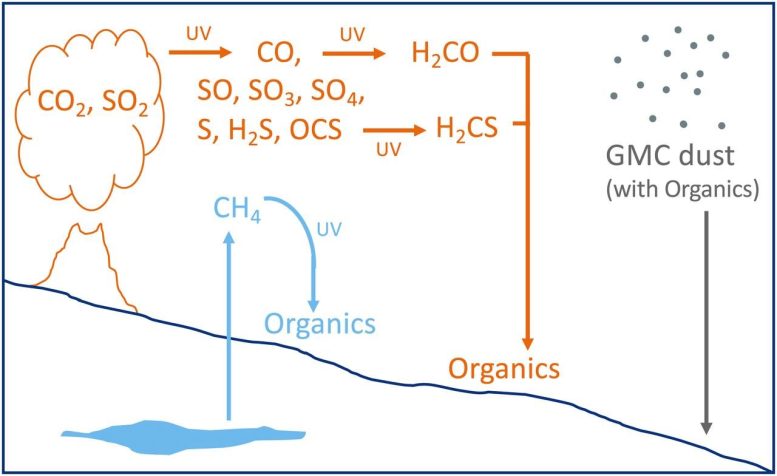 This figure from the study shows the three hypotheses that could explain the carbon signature. The blue shows biologically produced methane from the Martian interior, creating the deposition of 13C-depleted organic material after photolysis. The orange shows photochemical reactions via UV light that can result in various atmospheric products, some of which would be deposited as organic material with easily-broken chemical bonds. The grey shows the molecular cloud hypothesis. Credit: House et al. 2022.

“On Earth, processes that would produce the carbon signal we’re detecting on Mars are biological,” House added. “We have to understand whether the same explanation works for Mars or if there are other explanations because Mars is very different.”

Almost half of the Curiosity samples had unexpectedly elevated levels of C12. They’re not only higher than Earth’s ratio; they’re higher than scientists have found in Martian meteorites and the Martian atmosphere. The samples came from five locations in Gale Crater, and all the locations had one thing in common: they have ancient, well-preserved surfaces.

“Defining the carbon cycle on Mars is absolutely key to trying to understand how life could fit into that cycle,” said Andrew Steele, a Curiosity scientist based at the Carnegie Institution for Science in Washington, D.C. “We have done that really successfully on Earth, but we are just beginning to define that cycle for Mars.” 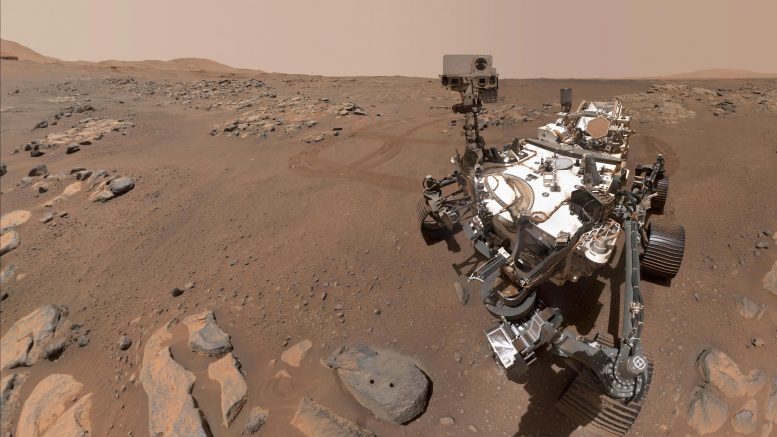 Curiosity is still working on Mars and will be for a while yet. The meaning of these samples, along with a better understanding of Mars’ carbon cycle, lies ahead. Curiosity will sample more rock to measure carbon isotope concentrations. It’ll sample rock from other well-preserved ancient surfaces to see if results are similar to these. Ideally, it would encounter another methane plume and sample it, but those events are unpredictable, and there’s no way to prepare for one.

Either way, these results will help inform Perseverance’s sample collecting at Jezero Crater. Perseverance may confirm similar carbon signals and even determine if they’re biological or not.

Perseverance is also gathering samples for return to Earth. Scientists will study those samples more effectively than the rover’s onboard lab can, so who knows what we’ll learn.

Ancient life on Mars is a tantalizing prospect, but for now, at least, it’s uncertain.

For more on this research, see:

Bitcoin Fixes The Economic Hurricane Happening Around The World