Russian President Vladimir Putin speaks during a meeting on the military-industrial complex at the Kremlin, September 20, 2022, in Moscow, Russia.

Russian President Vladimir Putin on Wednesday announced a partial military mobilization in Russia, putting the country’s people and economy on a wartime footing as Moscow’s invasion of Ukraine continues.

In a rare pre-recorded televised announcement, Putin said the West “wants to destroy our country” and claimed the West had tried to “turn Ukraine’s people into cannon fodder,” in comments translated by Reuters, repeating earlier claims in which he has blamed Western nations for starting a proxy war with Russia.

Putin said “mobilization events” would begin Wednesday without providing further details, aside from saying that he had ordered an increase in funding to boost Russia’s weapons production, having committed (and lost) a large amount of weaponry during the conflict, which began in late February.

A partial mobilization is a hazy concept, but it could mean that Russian businesses and citizens have to contribute more to the war effort. Russia has not yet declared war on Ukraine, despite having invaded it in February, and it calls its invasion a “special military operation.”

Putin confirmed that military reservists would be called-up into active service, but insisted a wider conscription of Russian men of fighting age was not taking place.

“I reiterate, we are talking about partial mobilization, that is, only citizens who are currently in the reserve will be subject to conscription, and above all, those who served in the armed forces have a certain military specialty and relevant experience. Conscripts will obligatorily go through additional military training based on the experience of the special military operation before departing to the units,” he said according to an AP translation. 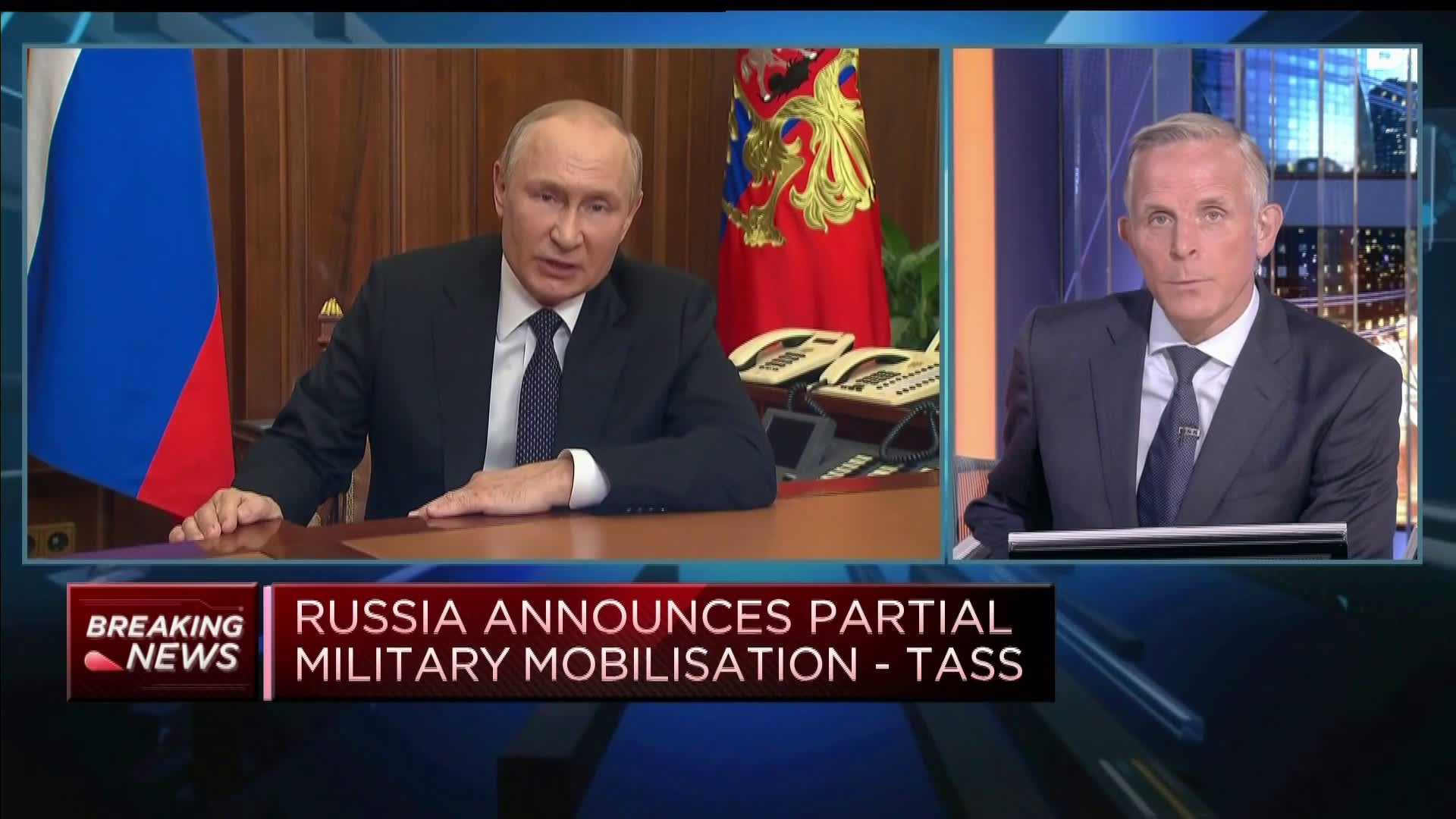 In what was immediately greeted as an escalatory address, Putin also accused the West of engaging in nuclear blackmail against Russia and warned again that the country had “lots of weapons to reply” to what he said were Western threats — adding that he was not bluffing.

Putin has alluded to Russia’s nuclear weaponry at various points during the conflict with Ukraine but there are doubts over whether Moscow would actually resort to deploying such a weapon, with analysts saying it could be tantamount to starting a third world war.

China’s foreign ministry called on all parties to engage in dialogue to find a way to address the security concerns of all parties, while British Foreign Office Minister Gillian Keegan told Sky News that Putin’s comments should not be taken lightly.

“Clearly it’s something that we should take very seriously because, you know, we’re not in control — I’m not sure he’s in control either, really. This is obviously an escalation,” she said.

Financial markets reacted negatively to Putin’s comments with oil prices spiking more than 2% and the Russian ruble slumping around 2.6% against the dollar.

Putin’s comments come as Russia’s invasion of Ukraine, which began in late February, approaches the winter period with momentum appearing to be on Ukraine’s side after it launched lightning counteroffensives in the northeast and south to reclaim lost territory.

Speculation mounted Tuesday that Putin could be about to announce a full or partial mobilization of the Russian economy and society, paving the way for possible conscription of Russian men of fighting age, after Moscow-installed officials in occupied areas of Ukraine announced plans to stage immediate referenda on joining Russia.

The votes — set to take place in Donetsk, Luhansk, Kherson and Zaporizhzhia this weekend and with the results widely expected to be rigged in favor of joining Russia — would enable the Kremlin to claim, albeit falsely, that it was “defending” its own territory and citizens, and that will require more manpower.

Putin said Wednesday that Russia supported the referenda and said that the decision to partially mobilize was “fully adequate to the threats we face, namely to protect our homeland, its sovereignty and territorial integrity, to ensure the security of our people and people in the liberated territories.”

Plans to hold such votes were widely condemned by Ukraine and its Western allies who said they would not recognize the ballots and efforts to annex more of Ukraine, as Russia did with Crimea in 2014.

Putin on Wednesday repeated earlier claims from Moscow that Russia’s aim is to “liberate” the Donbas, a region in eastern Ukraine in which there are two self-proclaimed, pro-Russian republics, and said he had ordered the government to give legal status to volunteers fighting in the Donbas, Reuters reported.

Morale is believed to be low among Russian troops fighting in Ukraine and on Tuesdsay, the Russian Duma voted to tighten up Russia’s criminal code around military service — including increasing the punishment for desertion and other “crimes committed in conditions of mobilization, martial law, armed conflicts and hostilities.”

The U.K.’s Ministry of Defence commented on Twitter Wednesday that this move was likely intended to limit the number of refusals to fight, and designed to mitigate some of the immediate personnel “pressures.”

December Is the Time to See the Cold Cold Moon

How did a Japanese WWII submarine end up in Texas?